Suzanne and Jacob Doft and Family

Leviticus is the third of the Five Books of Moses, central not only chronologically but also as the narrative’s fulcrum — its laws, precepts and commandments shaping Jewish life both morally and spiritually.

Placed at the center of Friedman’s five windows, it binds them together:  it alone contains the entire color spectrum, thus combining the hues of all five, and its structure allows the events preceding nationhood (related in Genesis and Exodus) to flow in from one side, and those that follow it (described in Numbers and Deuteronomy) to course in from the other.   With this book focusing on concepts rather than events, the artist portrays it in three concentric circles.

The innermost, glowing and sublime, shows man’s relationship with G-d, expressed in the laws of Temple worship.  The second circle, hued in heavenly blues, depicts the laws that govern human interaction, both man with G-d, and man with man — laws whose observance sanctifies man.  The third circle integrates earthly and divine in the natural cycle of the year and regulation of the cultivation of the Eretz Yisrael.  In natural tones that reflect an agricultural nation living in its Land, we see laws of social justice (tithing, gleanings for the poor) along with establishment of the annual pilgrimage festivals — Pesach, Shavuot and Sukkot — that connect heaven and earth, and ensure Israel remembers its covenant with the Almighty.

The window also shows that man has a part to play in the course of his own future:  for those of faith (upper right) there will be prosperity; for those who shun the Law (lower left), fear and sickness. 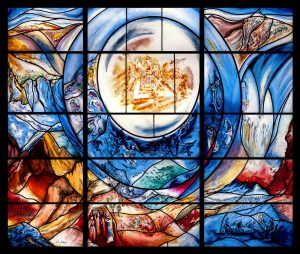